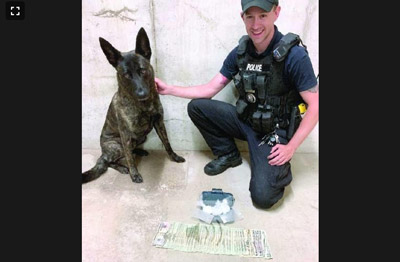 EVART — A recent traffic stop tuned out to be anything but routine for an Evart Police Department officer and his K9 partner Blue.

At 1 a.m. on July 26, officer Patrick McClure conducted what he thought would be a routine traffic stop on an ORV with defective equipment. Before he could, however, the driver of the ORV fled the scene on foot but was apprehended a short time later, police said.

A K9 search of the area where the suspect was located led to the recovery of a large number of drugs including methamphetamine and crack cocaine, according to police. A significant amount of money in small denomination also was recovered from the scene. Read More
Attendee Registration
REGISTER TODAY!
Don't miss out on one of the finest K-9 events of 2023! 9th Annual International Police K-9 Conference & Vendor Show. See YOU in Vegas!
Our Facebook Feed
Subscriptions