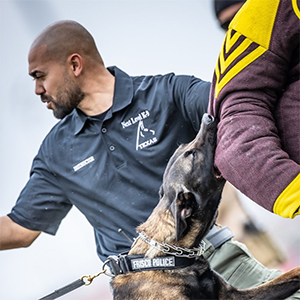 ​    His first encounter with a K-9 team was in New York City on September 11, 2001. He witnessed a search and rescue K-9 team fighting through horrible conditions, while overcoming serious injury for the sake of saving lives. That encounter made such a profound impression on him that he knew what he wanted to do for the rest of his life.

​    15 years later, on July 7, 2016, in Dallas, Texas, K-9 Officer Antommarchi found himself in the middle of the deadliest attack on law enforcement since 9/11. Tasked with the responsibility of clearing the downtown area for improvised explosive devices, the reason he got into working K-9s came full circle.

​    Being mentored by Tony Guzman and Robert “Bob” Suarez, Antommarchi is an Instructor for Texas School Safety Center at Texas State University, a K-9 case study trainer for the International Forensic Research Institute (IFRI) and a trainer for Metro Dade K9.

​    Most recently, he became one of the lead trainers and co-designer of the training methodology for a scientific study through IFRI on “Hemp vs Marijuana.” This study is to evaluate the ability for narcotic detector dogs to discriminate between the odor of marijuana and hemp. The study is being headed by Dr. Kelvin Frank of Florida International University and is in the process of being submitted for publication.

​    Antommarchi is the K-9 trainer for over a dozen north Texas law enforcement agencies and travels across the United States with a team of K-9 instructors conducting workshops and seminars focusing on operational readiness and K-9 aggression instincts.

Have you wondered why two different dogs of the same breed, with the same amount of drive can act so differently when introduced to various operational exercises? Have you tried to train two different dogs the same way and get vastly different results? The first step in the solution is to learn, understand and exploit the different types of instincts found within each canine which will allow for a more individualized approach to training. In this class, you will learn to characterize those instincts, manipulate them to get the most out of your canine and develop the desired instincts and suppressing the undesired. A detection demonstration will be presented to show the results of proper manipulation of canine instincts paired with trained obedience to odor.