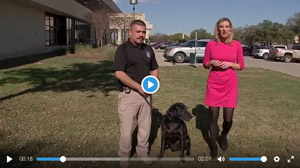 Bo, an ATF explosives detection canine, has a fan club.

On Tuesday, he was getting ready for a photo shoot at Texas A&M. He’s being featured in one of the university’s magazines.
“If there’s any canine deserving of this recognition, it’s him,” said ATF Special Agent Eduardo Ramirez, Bo’s handler.

Ramirez and Bo made a trip from the Brownsville area to College Station for a special visit for the magazine and photo shoot.

It’s been quite a journey for Bo. He’s been with the ATF since 2013 and has had an impressive career. He and Ramirez were on the front lines in the Austin bomber case, where they’ve tracked down criminals in numerous cases in homicides, drug cases and situations involving explosives. Read More