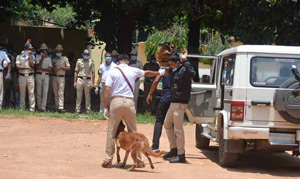 As many as 50 dogs will be adopted and inducted in the Dog Squad for Rs 2.5 crore to strengthen the state police force, Bangalore City police commissioner Bhaskar Rao said on Tuesday.

Inaugurating the newly upgraded Dog Activity Park at CAR (South) in Adugodi, Koramangala in the city, the Bengaluru police chief said that the Dog Squad plays an important role in the detection of explosives, drugs and detection of clues at the scene of the crime. Read More