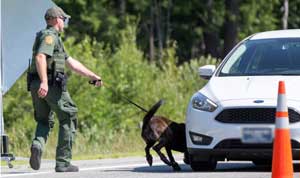 The two suspects, both U.S. citizens according to a Customs and Border Protection (CBP) media release, were attempting to smuggle a large quantity of drugs across the border on the afternoon of Sept. 14. The dogs alerted their human counterparts to the presence of narcotics. Read More