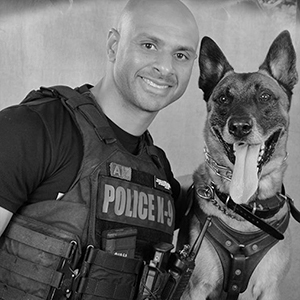 Blake Broadhurst is an active police K-9 handler and instructor for the Orlando Police Department. He has served as a police officer for 15 years, spending 13 on specialty units to include SWAT, drug interdiction team and crime suppression units. He has been involved in over 150 solo uses of force during his career, ranging from hand-to-hand combat to deadly force encounters. His defensive tactics background is in Goju Martial Arts and kick boxing. Blake holds instructor certifications in defensive tactics, basic K-9 patrol and as a federal active shooter instructor. He also has developed multiple police training programs that focus on improving officers’ tactics and decision-making processes during responses to resistance. Blake is the owner and lead instructor for Mav1 Tactics as well as the author of K-9 Tactical Team Takedowns Tactics Manual.

This course is an advanced class for K-9 handlers who are interested in evolving their deployment skills applicable to real-world performance. The course introduces a learning strategy as well as techniques to build a structured, efficient and safer way of conducting an active K-9 takedown of a resisting suspect. The techniques taught are based on common K-9 deployments and on deadly force encounters involving K-9 apprehensions. In this course, we debrief numerous apprehension scenarios, instruct on team tactics and develop a handler’s decision making and defensive tactics skills to reduce the amount of force used by a handler which in turn decreases the use of excessive force. The course will consist of the following topics: K-9 defensive tactics, real world K-9 team takedowns, K-9 choke defense and close quarter combat techniques.