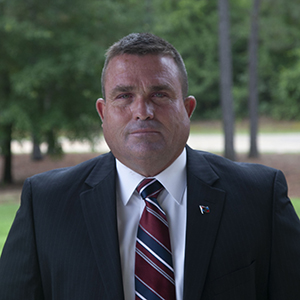 Vice President, Canine Operations, is responsible for the day-to-day canine operations at the Canine Training Center. Tracy maintains a high standard for canine care and training as well a superb work ethic for canine handlers and trainers.

Tracy Campbell is a retired police officer with the City of Fayetteville with over 25 years of experience as dog handler and trainer. He has handled patrol dogs on the streets of Fayetteville for over 21 years and is also a Veteran of the United States Army.

Tracy has trained officers and soldiers from all over the United States, Germany, the Netherlands, Iraq, and Nigeria.

Tracy Campbell is a Master Trainer and President of IPWDA, a General Instructor with the State of North Carolina and an ATF Evaluator. He has served on the following boards: NECAB, SWGDOG and Orthogonal Detector Guidelines.

K2 has developed the Person-Borne Explosive Detection Canine (PB-EDC) capability, through which canines are trained to recognize a scent trail signature on a mobile target. This capability unmasks the growing threat of hidden, yet mobile, explosives and puts detection in the hands of security units. It is a non-threatening effective way of searching locations such as mass-transit hubs, schools, universities, sporting events, and locations that would host a large crowd.