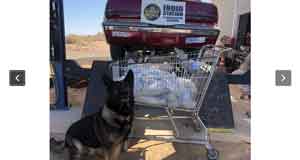 EL CENTRO, Calif. — Border Patrol agents found more than 60 packages of drugs hidden in the fuel tank of a sedan that tried to pass through a checkpoint east of San Diego County Wednesday, the agency said.

The drugs were found after a man pulled up to the state Route 86 checkpoint run by USBP’s El Centro sector around 11:30 a.m., officials said. After a drug-detecting dog took an interest in the vehicle, agents told the driver to pull aside, and they started a more thorough inspection. Read More