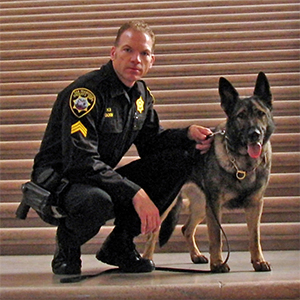 For most of David’s canine handling career, he handled two (2) canines on a daily basis. David implemented the Canine Unit at the San Francisco Sheriff’s Department in 1998. David has assisted several other LE Agencies in the implementation of their Canine Programs, managing, and maintaining their agencies K9 Units.

David is an accomplished author and has created an Online Education K9 platform K-9FTO (K-9 Field Training Officer), which is an Education Registered Mark and Copyrighted. This educational curriculum is for the education of Handler Instructors and K9 Supervisors to assist and bridge the gap of initial training to the actual deployment in the field (real world), which in turn helps canine teams be ready for certification and evaluation in the operation field not just in the training room.

He has also been published in K-9Cop Magazine, Police K-9 Magazine with featured articles in scent detection dog training and deployment, “Normalization of the Explosive Detection Dog Handler”, k-9 unit supervision, as well as problem solving the k-9 program.

David has thousands of hours in basic and advanced Police Service Dog, Narcotic and Explosive Detection Dog Handler Training. David has participated in over 4,000 individual canine searches in the field. In addition, he has been present and observed hundreds of NDD and EDD deployments by other canine teams from all over the nation. David holds a certificate as a California POST Certified Canine Team Evaluator since 2002. David sat on the committee for the Western States Police Canine Association in the implementation of K9 Teams Certification and has been a Certifying Official as well as a Trail/Competition Judge for Detection K9 Teams since 2008. Over the past 16 years, David has certified and evaluated over 100 K9 Teams.

David also held a chair position and assisted in the implementation of the International Explosives Detection Dog Association. He is also a current, since 2001, member of the California Narcotics Canine Association. David Dorn is one of only 38 approved Cargo- Team 3rd party Evaluators for TSA. K-9STAC LLC is one of only 7 relevant Certification Companies selected and approved to conduct such TSA Cargo K-9 Team Evaluations.

David not only speaks as a subject matter expert on scent detection, training, deployment, and supervision at several major canine conferences a year since 2008, he also continues his education as a student at those conferences as well.

David maintains a professional relationship with all of his past and current trainee handler and trainers, including other vendors and certification officials in his industry. In turn keeping everything on a professional training is training and certification testing is testing relationship to avoid any conflicts for businesses and court issues that could arise otherwise. All of his large scale or multiple agency trainings including with TSA Personnel has all been voluntary (no monetary exchange or promises).

Our (Main) Evaluator (David Dorn), already posses the training, experience in training, operational director, certifying and evaluating K9 Teams and we believe he meets the background to perform the functions as Consultant and Director of All K9 Operations for the Patriot Group. Our company, including David will continue to certify WSPCA & POST K9 Teams and strive to be the most competent and knowledgeable professional in his field.

David not only speaks as a subject matter expert on scent detection, training, deployment, and supervision at several major canine conferences a year since 2008, he speaks at least 4 a year since. David also continues his education as a student at those conferences as well.

As of now I am the Owner and CEO for K-9STAC LLC, however, I have my assistant Angela Spears, whom assistance with the Scheduling or Security Coordinator positions of this program and I will ensure that that person(s) meet and exceed all training, continued training and experiences to ensure we have and continue to have the best people in the industry.

Class: The Role of the K-9 Unit Supervisor