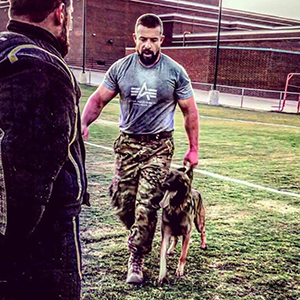 Leos Drbohlav was born into a family of dedicated Czech canine trainers and handlers dating back generations. Josef Janos, Leos’ grandfather, was officially recognized as the top canine handler and trainer in the Czechoslovakian military in 1954 for his accomplishments during World War II. Those accomplishments continued for decades later in both the government and private sectors. Mr. Janos recognized his grandson’s similar passion for canines early and began training Leos immediately. Leos performed his first public canine demonstration at the age of four, in front of the highly critical North Bohemian Police Trial. This successful demonstration earned him accolades and was a testament not only to his grandfather’s experience and expertise passed on to Leos, but was also an indicator of Leos’ instinctual understanding of the handler and canine relationship as well as his passion for training. A few years later at the age of eight, Leos titled his first canine and his accomplishments and knowledge have continued to exponentially grow ever since.

Leos continues to be one of the most internationally renowned and sought after canine subject matter experts in the world, but even further sets himself apart as elite by also understanding the importance of training the handlers beyond just the basics needed to perform at the introductory levels. Leos understands the canine team dynamic like no other: the canine is only as good as the handler, but a properly educated handler can improve nearly any canine partner. Leos trains both the canine and the handler in full spectrum operations based on their mission requirements but does so with the approach of training the entire life cycle of the handler for anything they may face “real world” as well. Leos believes that if training stagnates, so will progress, and delivers his training in a way that he is not just producing handlers. Leos believes that handlers should be trained well enough to be potential instructors, and spares no effort in continually reaching that goal with each of his clients. The truth is in the result, and watching Leos consistently produce stellar canine and handler teams is proof his methods are well beyond effective.

Leos conducts seminars around the globe for various law enforcement, military, special operations, and other government agencies regularly. Despite titling 15 canines, seven of which were at the most stringent levels, Leos continues to incorporate advanced behavioral sciences, several lifetimes of experiences that were passed down to him, his own extensive experiences and expertise earned over four decades, and proprietary training methods to continue making the best canine teams even better. Leos’ goal is not titles or recognition. His goal is simply to put the best handlers and canines to work in the most demanding fields to save lives, and have positive systemic impacts on every entity he works with.

Narcotics is a very complex and knowledge demanding discipline. Simple recognition of an odor and final alert is basically all you get from a basic handler course. It’s the street where all the questions and troubles start popping up out of nowhere: false alerts, searching pattern, independent work, odor threshold, odor discrimination, reliability, sensitivity to environment, level of difficulty etc. This seminar will explain how to bring your dog to the next level step by step.

Class: The K-9 Industry is Lying to You About Bitework

Where is the truth about old school biting and where are the skeletons hidden? How is training of scenarios helpful and how can it actually hurt you on the street? We’ll discuss how to understand and how to navigate new and cool looking biting exercises that are out there. All that and much more from the puppy to a fully trained dog.