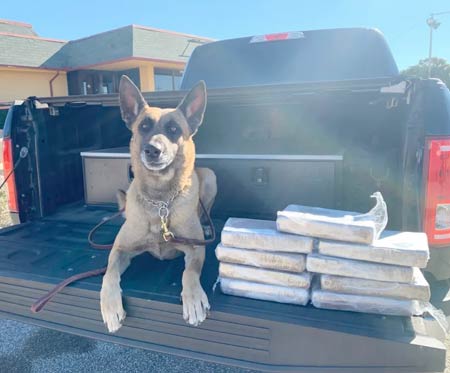 A K9 with the Oklahoma Bureau of Narcotics is getting a few extra treats following a major drug bust on Wednesday.

Officials with the OBN say K9 Yeko intercepted 9 kilos of fentanyl that was being trafficked through Oklahoma.

The department says the fentanyl was enough to make over 90,000 counterfeit pills with a street value of $3.6 million.

In September, the Drug Enforcement Agency issued a Public Safety Alert about the increasing number of fake prescription pills containing fentanyl and methamphetamine entering the country. The pills are sometimes deadly, and are being mass-produced by criminal drug networks.

DEA testing indicates a dramatic rise in the number of counterfeit pills containing at least two milligrams of fentanyl – which is considered a deadly dose and could fit on the tip of a pencil. Read More