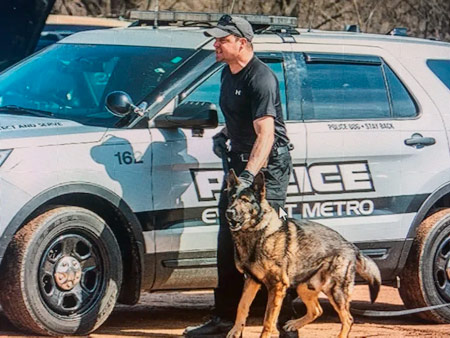 WESTON – Everest Metro Police Department will bid farewell to one of its four-legged officers this week.

K9 Aron has been a member of the department for nine years. During his career, he’s had roughly 1,400 deployments and 400 arrests. During the past six years, K9 Aron has been at the side of his handler, Officer Matt Hable.

K9 Aron is approaching 12 years old, which is a long career for a working K9. His replacement K9 and handler have been selected and they will attend five weeks of training beginning in September.

The department is accepting donations for its K9 and therapy dog programs. Anyone who donates at least $50 will receive a free EMPD challenge coin. Read More