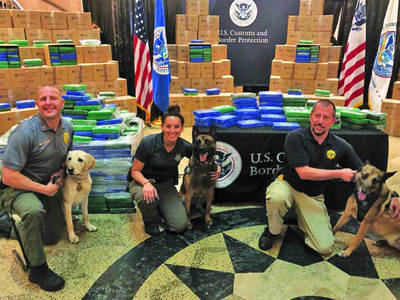 Even if 17.5 tons of cocaine represents only a fraction of the illegal drugs flowing through the United States, the 15,582 bricks nosed out by eight K-9 dogs in Philadelphia on June 17 was “the largest cocaine seizure American history,” says Robbinsville Police Sergeant Scott Kivet.

Three of the eight K9 handlers and their dogs who searched out the drugs were from Mercer County, including Ewing Police Officer Brittney Fornarotto and Jax. The other two were Kivet and Quori and Det. Sgt. Joe Angarone and Bela of the Mercer County Prosecutor’s Office.

The dogs scoured a large Liberian-flagged container ship and pinpointed cocaine with a street value of about $1.1 billion hidden in just seven of thousands of containers on the ship. Read More