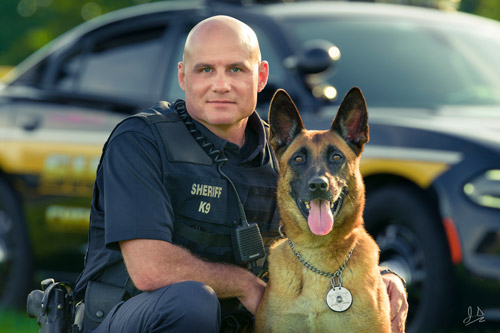 On July 7, 2021 the West Pikeland PA Police Department called the Chester County Sheriff’s Office in PA requesting assistance with help finding a missing woman.  The woman was emotionally distraught and ran from her home leaving a good bye note behind.

The Chester County Sheriff’s Office Canine Unit responded within an hour to the location.  The area that the woman fled in was densely wooded and remote.  The heat index on this date was estimated to rise to 105.  Chester County Sheriff canine members Deputy Dave Barbone and his canine partner Dexter along with Deputy Matthew Moyer and his canine partner Zeeke responded.

A plan was devised and within 20 minutes canine Dexter found and indicated where the woman was.    The woman had fallen or jumped down a 25 foot ridge and was covered by vegetation.  Her family had covered the area she was found earlier with negative results.  Even with the CCSO K9 team located her she would not say anything to alert anyone of her presence.

Deputy Barbone used his tracking lead to get to the area that the woman was in.  He then used the lead to help pull her out of the thicket she was in.

If not for the quick efforts of the West Pikeland Police Department and response of the Chester County Sheriff’s Office Canine Unit responding to this situation it  would not have been resolved so quickly. The woman only suffered superficial wounds.   Deputy David Barbone and his canine partner are to be commended for locating this woman in a timely manner.