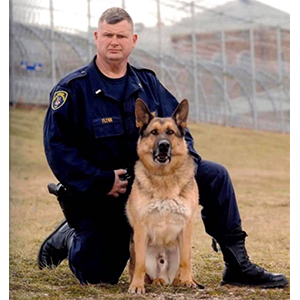 Mark Flynn began his career in the Military working dog academy in 1984 at Lackland AFB Texas, and served for 11 years as a Military Working Dog Handler, Supervisor and K-9 Trainer. He transitioned to the civilian world in 1995, and became a K-9 Handler for the MD DPSCS K-9 Unit. The MD DPSCS K-9 Unit is a 40 person force of sworn police officers that patrol the Maryland Prison systems, it’s grounds and surrounding areas, interdicting CDS, explosives and contraband, providing armed response and Patrol dog assistance to emergencies, and providing tactical response in the event of escapes and inmate uprisings.

Major Flynn utilizes his 36 years’ experience in the K-9 field as a dynamic and entertaining instructor, and he frequently teaches at the Police, Correctional and Canine academies in the Maryland and DC metro area. He has also appeared on various TV Programs and news channels, such as Nat-Geo, (Big Bigger Biggest Prison addition), Beyond Scared Straight (Hagerstown addition), and numerous other programs.

Class: On the Road or Behind the Fence; Unique Concerns of Police K-9s and Corrections

This 2-hour training seminar will focus on police canines as they serve both on the road and in the correctional environments that they respond to as part of their beat. There will be an emphasis on CDS introduction and trafficking trends. These trends covered will include detecting and interdicting contraband on staff, visitors, volunteers, and support personnel, cell phone detection canines,  prevalence of buprenorphine (brand name Suboxone, which is very widespread in the mid-Atlantic correctional systems), K-2 and Spice, and the value of passive alert dogs and PEOPLE scans.

The class will also cover the development of relationships and use of the rescue dog organizations, and the use of unconventional (Floppy eared) breeds in detector work (English springier spaniels, Labs, Etc.). The class will have a dynamic and interactive power point and an extensive Q&A.