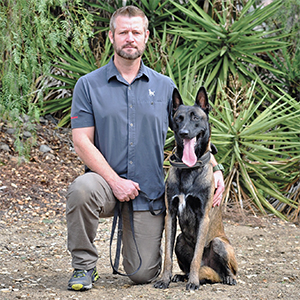 Jeff is the owner and operator of Cobra Canine. He has dedicated the last 22 years developing the finest quality canines for military, police, detection, drug, tracking, personal protection, and pet dog obedience. Jeff has worked with over 10,000 pet dogs and families. He has trained hundreds of dogs for police and special operations, such as SWAT and Military units. Jeff has been responsible for training, certifying, and ensuring that military as well as police working dogs were ready to deploy in today’s theaters of operations. Jeff has been directly responsible for serving the needs of several large programs including DOS, Pentagon, U.S. Customs, U.S. Military, Guatemala, Ecuador, El Salvador, Paraguay, Algeria, and numerous police departments.

Jeff has over ten years experience of real world experience as a police canine handler and trainer, and has seen first hand the results of his efforts. Jeff has trained over 3,000 dogs and has the unique ability to match the right canine for your organizations needs.
Cobra Canine has severed as a sub-contractor on several canine related projects with prime vendors such as Xe Services, Triple Canopy, and Securitas. We are aware of the D.O.S. regulations for the canines and are capable of fulfilling them.