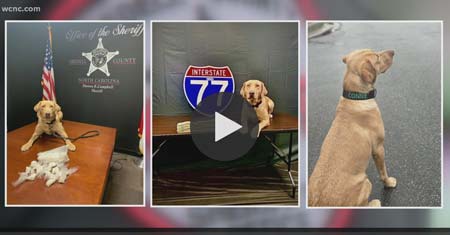 As it turns out, dogs are helping catch criminals in Iredell County.

The Iredell County Sheriff’s Office’s K-9s recently sniffed out more than 100 pounds of illegal drugs during a traffic stop.

Whatever Sergeant Leo Hayes asks Connie to do, the K-9 is on it. Connie has a nose for the scent of trouble.

“When she smells the odor of illegal drugs, she freezes, her tail goes straight, she quits breathing– I can’t tell a dog to do that, that’s her way of telling me like hey there is drugs in that car,” Sergeant Leo Hayes said. “The dogs think that they’re searching for a toy that has the odor of the drugs that they’re trained to find.” Read More