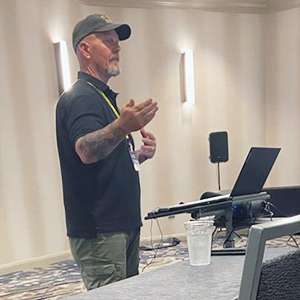 Jonathan Baer is retired from the US Air Force. He started his K-9 career with the USAF in January 1999 with the Military Working Dog Program. His first canine overseas contract was in Kuwait for the Department of Defense as the MWD Trainer Supervisor. He then went on to work for the Department of State as the Kennel Master for training in Baghdad. Afterwards, he came back to the United States and started with the TSA, where he worked for three years as a handler and unit trainer. After leaving the TSA, Jonathan went back to contract work as a Handler Trainer in Afghanistan. His last overseas contract ended in September 2020 as the K-9 Project Manager for a NATO contract with Narc/Explosives Teams. Jonathan has 22 years of experience within the MWD/DoS/TSA Canine and NATO Canine Programs. He has certified as a Handler with DoD, DoS and TSA and has been a Detection Dog Certifying Official for the DoS and NATO programs.

This class will discuss objective based detection training.