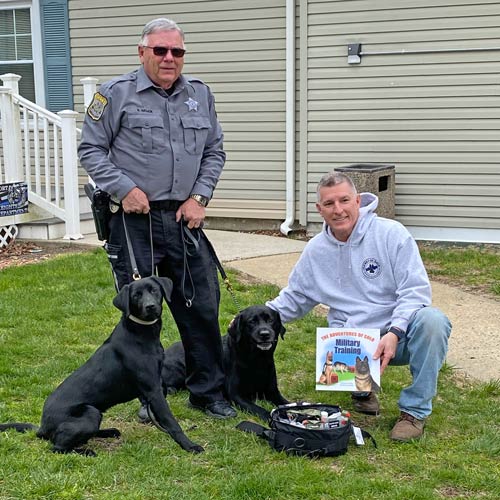 Six years ago, James Wiater, a carpentry school teacher, wrote and published his first children’s book called “The Adventures of Solo, the Big Dog”. With the proceeds from the sale, he hoped to purchase a ballistic vest for a K9 in need. The book was an instant success and Wiater sold enough copies in six months to achieve his goal! But this story started many years earlier, when in 1998 he read a magazine article about a NJ Sheriff K9 who was at the scene of a police standoff in Bradley Beach, NJ. As the situation unfolded, a wanted suspect had barricaded himself in a local apartment building and managed to keep the police at bay for twenty-two hours. After several failed attempts to get the suspect out of the building, the decision was made to send a K9 in to apprehend him. The article stated that as K9 Officer Robin Eckel was preparing his K9 partner, Solo, to enter the building, he had a feeling that he was never going to see him again. Without reservation, Solo entered the building as he was trained to do and while approaching the barricaded room, he was shot and killed. After reading that story Wiater made a promise to himself that one day he would buy a ballistic vest for a police K9. It took many years but Wiater’s book, “The Adventures of Solo, The Big Dog” helped make that dream come true. The plot of the story came to Wiater one evening while trying to comfort his twin daughters Nicole and Kaci, distraught about losing their baby teeth. That night, Wiater wrote his story down, turned it into a children’s book, and decided to title it in honor of the fallen hero, Solo. In 2017 James Wiater kept the promise he had made to himself so many years ago, and donated a ballistic vest to the Monmouth County, NJ Sheriff’s Office—the same Sheriff’s office that Solo had served. The book sales continued and Wiater was able to donate two more vests that very same year. As more K9 officers learned of the book and the mission behind it, more requests for vests and other K9 safety equipment came pouring in. Wiater realized that his promise had grown into something larger and he decided to start a nonprofit in 2020 called “The Friends of Solo Foundation”, which continues to provide safety equipment to K9’s throughout the United States. To date, James Wiater and the foundation have been able to donate 20 vests, 24 trauma kits and other safety equipment to K9’s in need. Wiater has since written his second book of the series called, “The Adventures of Solo, Military Training”. To make a donation, become a sponsor, purchase a Friends of Solo children’s book or Solo apparel, please visit the Friends of Solo website at www.FriendsofSoloFoundation.org or, find the Foundation on Facebook and Instagram @FriendsofSolo
Attendee Registration
REGISTER TODAY!
Don't miss out on one of the finest K-9 events of 2023! 9th Annual International Police K-9 Conference & Vendor Show. See YOU in Vegas!
Our Facebook Feed
Subscriptions