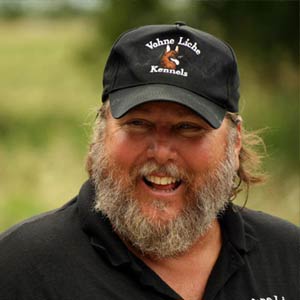 Ken Licklider, SMSGT, USAF (Ret) is the owner and Chief Trainer of Vohne Liche Kennels, Inc. Mr. Licklider has fourty-five (45) years canine experience, including seventeen (17) years serving in the United States Air Force in the canine field. Upon retirement in 1993, Mr. Licklider formed Vohne Liche Kennels, Inc. Mr. Licklider is world renowned for his scent work, which has been copied by trainers worldwide to include Dutch Customs, and he has traveled around the world teaching his methodologies. He has been instrumental in the development of the passive response detector dog and has aided agencies around the world in not only training their dogs, but also developing their programs. Selected as a charter member of Scientific Working Group on Dog & Orthogonal Detector Guidelines (SWGDOG), Ken is one (1) of only two (2) private trainers allowed on the panel of fifty (50) plus top trainers in the United States.

Ken designed and developed the current K-9 program for U.S. Special Forces. He conducts seminars worldwide, has been cadre for several years at the two (2) largest K-9 seminars in the U.S. Ken has developed kennels and kennel support in Holland and Turkey with branches in South Africa and Brazil. He has trained/worked with over two thousand five hundred (2,500) dogs in his career. VLK trains more than five hundred (500) dogs per year for local, state, federal and private organizations. He currently has dogs in over eight hundred (800) law enforcement agencies to include the National Security Agency (NSA), Pentagon Police, U.S. Secret Service, over forty-eight (48) states and more than twenty (20) countries, including hundreds of teams in Afghanistan and Iraq with recently dogs sold to Senegal, Ecuador, Costa Rica and teams deployed to Brazil.

This class will take handlers deeper into why detection dogs do what they do. Ken will delve into what drives are and how they are utilized. The term ‘obedient to odor’ refers to the dog understanding that odor drives the reward, not the handler. This fast pace class will cover everything from odor imprintation, to reward, to search patterns and the whys behind each of these components of detection dog training. Not only is this class highly entertaining but, most of all, it is also highly informative.