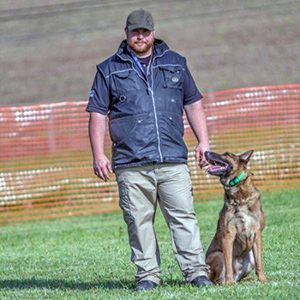 Nick is also the Club Training Director for a dog sport called French Ring. Under his guidance and decoy work, multiple dogs within the club are competing at the highest levels, with multiple Regional and Championship events, International Competition and numerous dogs to compete internationally with the “Team USA” designation. French Ring is notable for its complexity of bite targeting and control during aggression. Nick is an active competitor in French Ring, handling and titling five dogs within the sport, two of which are French Ring 3 competitors. Nick is also a Certified Peace Officer in the State of Georgia.

This class will cover basic learning theory, terminology, K-9 BSD uses, Direct and Indirect Reward Systems and progression of use for K-9 BSD.