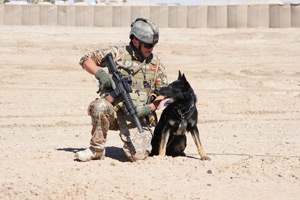 Michael joined the Danish Air Force in 2008 after five years in the Danish Army with one deployment to Afghanistan, where he saw what K-9s can do. Michael started out as an MWD P.E.D.D. handler for 7 years, where he did two deployments to Afghanistan. He was the first ever Danish K-9 handler to be deployed with the Danish Special Forces in these two deployments. Afterwards, he became a trainer at the Danish Military K9 Academy and for the next 4 years, he worked with the purchase of the dogs, trained puppies and green dogs to be fully certified MWDs and instructed classes and certifications. Michael helped build the Tactical K9 First Aid in the Danish Military and after starting his own company, Danish K9 Solutions, in 2008, he developed AIDOG, which is an essential part of his company. The prototype of the IBO255 K9 first aid bandage was developed on his last tour to Afghanistan.

This class will cover the AIDOG way of K-9 first aid. Michael developed this system during his service as a K-9 handler and trainer for the Danish military. Topics covered include how to use C-abcde algorithm when administering K-9 first aid, the most typical injuries a working dog will have, items that should be in your K-9 IFAK and more. Instruction will include theory as well as a hands-on demonstration.

This class will cover the genetic aspects of selecting the right dog for your K-9 unit. Topics will include: