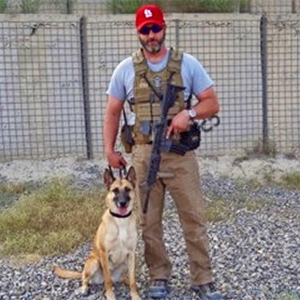 Paul’s canine passion started at the age of 6 years old. That passion for police canine work was instilled by Paul’s grandfather who was a police K-9 handler/trainer. Growing up, Paul was volunteered often to wrap up and take bites from whatever police K-9’s that his grandfather was training at the time.

Mr. Orcutt spent 10 years active duty as a U.S. Marine and served in the first Gulf War and later served in the Somalia conflict. After leaving the Corps Paul was hired to perform contract work for the CIA as a K-9 handler/trainer for a clandestine K-9 Program. While in performance of his duties for the agency, Paul has operated, trained and certified canine teams for duty in the most hostile and austere conditions. While deployed with OGA over several years, Paul and his K-9 partner Iro and later with K-9 Lucy found more than their fair share of explosive devices and IED’s and were directly responsible for saving hundreds of lives.

In 2013, Paul was hired as the Senior Training Manager at AMK9 and was tasked to develop and implement a canine training program for the WPS Department of State Diplomatic Security Branch. Between 2013 and 2017, Paul and his team of trainers and Instructors tested and selected, trained, certified through the Department of State’s Canine Validation Center as well as Department of Defense over 700 EDD K-9 teams.

Paul was also the Vice President of Canine Training for Global K9 Solutions. In 2017-2018, Global K9 Solutions was the largest and most successful vendor to DoD. Mr. Orcutt was responsible for all selection testing of over 200 green and fully trained PEDD’S delivered to DoD. Most recently, Paul performed the duties of Chief Operating Officer for Global K9 Protection Group and is one of the four original founding members and partners in GK9PG, one of the industry leaders in the 3PK9 program with TSA.

Paul is currently semi-retired from the canine industry and only doing consulting work.

Sign Up Now
For Email Marketing you can trust.
© 2020 Largo Communications