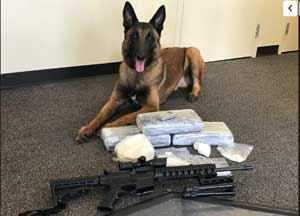 A Brookhaven K9 responsible for finding hundreds of thousands of U.S. currency and millions of dollars worth of illegal drugs is retiring.

According to an announcement from the Brookhaven police, K-9 Dano, officially retired from the police department on December 8, his 10th birthday.

Dano, a Belgian Malinois, joined the force in 2013.

During his time, Dano received certifications in narcotics detection, tracking, and criminal apprehension, and he re-certified in each category every year. Read More