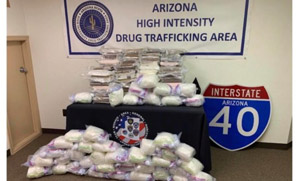 An Arizona task force discovered hundreds of pounds of illicit drugs during a recent traffic stop on I-40 near Kingman.

The massive drug bust was made on February 20 on I-40 at mile marker 33 west of Kingman, Arizona, according to a news release from the Bullhead City Police Department.

Around 6:30 p.m., officers with the task force “Mohave Area General Narcotics Enforcement Team” (M.A.G.N.E.T.) pulled over a semi truck on I-40.

With the aid of a drug sniffing dog, officers approximately 168 kilograms of cocaine and 220 pounds of meth. The combined street value of the drugs is estimated at around $12.7 million. Read More