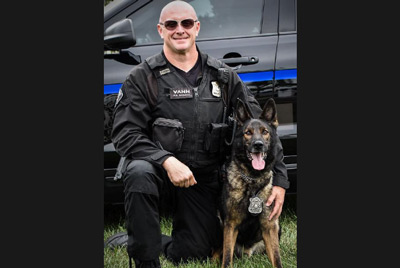 Woodhaven Police Officer Dean Vann is not a big fan of Facebook, nor is Police Chief Robert Toth, but both are singing the praises of social media now that the department has won a nationwide online photo contest for K9s and their handlers.

Vann is the handler for K9 Officer Bruno and their picture recently was entered into the magazine contest for an opportunity to have registration fees paid to attend the ninth annual international K-9 Cop Conference & Vendor Show in Nashville, Tennessee.

Vann and Bruno didn’t just win, they won by a landslide.

More than 1,600 people voted on Facebook for the Woodhaven team, with the second-place finisher coming in at about 300 votes.

There were 32 entries in the contest from departments in California, Kentucky, Florida, Canada, New York, Missouri and more.

The conference will be held in September and last for three days. Read More