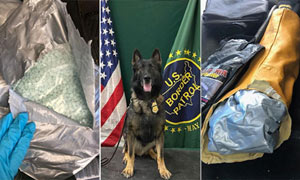 A Yuma Sector Border Patrol canine is being credited with helping authorities locate two major drug seizures within a week.

The dog, named Cibi, alerted authorities to the presence of drugs in a Dodge Dakota at the Highway 78 immigration checkpoint around 3 p.m. Monday, according to a press release.

Two U.S. citizens from Brawley, California, were arrested when a search of the car resulted in a leather jacket sleeve being found hidden under the vehicle’s rear seat with a duct-taped package inside that contained over seven pounds of fentanyl. Read More